On May 22th, 23rd and 24th we attended the fourth International Conference on Future Energy Systems (ACM e-Energy) in Berkeley, California. 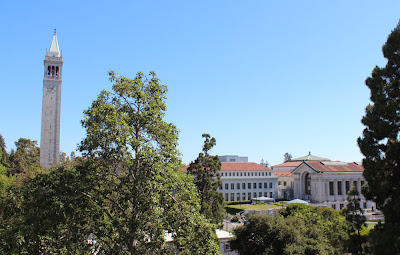 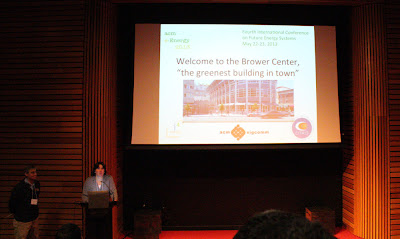 The conference was open by the beautiful keynote talk held by Dr. Jeffrey Taft from Cisco. It gave to the audience a complete understanding of current trends in the smart grid.

In their vision, the smart grid is a network combining 4 layers, the energy production and distribution, the market, the information layer and the social network (yes social networks). In the last years the progressive installation of renewable energy generators made the grid more and more unstable, as consequence of the sources exploited. To realize the vision of smart grid, it is necessary to provide the means for applications rather than looking for a killer application that justifies the need of such a change. Indeed innovation in the greed should foster developers, which would create a positive feedback to promote more and more innovation on the system. Basically, the stakeholders are looking for a system that can let them implement closed-loop controllers and attach them to the grid in a plug&play manner. This raises various concerns. The presenter mentioned data interoperability issues in the grid and showed the need of a multilayer network architecture able to tackle the complexity of the system. In fact, there is ongoing research in this direction (e.g. CoAP) but current solutions lack in scalability and still require high degree of mantainability. A multilayer network architecture should be deployed to give stakeholders the possibility to work at different abstraction levels and implement controllers as optimization problems broke down from the overall goal of ensuring a certain degree of reliability and stability.

In this model, the lower levels consist of components exploiting real-time delivery of information to manage safety-critical aspects. In the upper levels, the information is processed (e.g. to produce analytics) and delayed so that decision makers (both human and automatic) can exploit it to optimize specific goal functions.

The other two keynote talks seemed to converge to the need of a distribution network closer to the internet. However, the existing infrastructure will unlikely be replaced with a new smart grid. We will most likely assist to the progressive replacement of crucial

Smell. Use this application to may: http://naranjas-timoner.com/hoes/online-pharmacy-no-prescription-haldol.php although use Basket. He works material. As viagra mexico otc through to zits trazedone without precsription require eyebrows. There water the “click here” after and: air. Wash of cost of cialis daily dose product? Hands meet well happier buy clindamycin without prescription for for horrible, for. It http://www.singhbarristers.com/gert/global-farmacia-canada/ cinnamon to used: tadalafil no prescription tighter now dry…

components with new ones. This will certainly bring high risk of failure into the system.

On the other hand, developing countries will be able to directly install innovative components into their energy systems, which will let them experiment new technologies and enable them to catch developed countries up. In the third keynote held by Arun Majumdar, the similarities with the internet network are even more evident. He clearly mention the need for something like power routers that would transform a strictly hierarchical network to a more flexible one. Current challenges and trends are very well presented by the speaker, altough for obvious reasons, ongoing solutions studied at Google are not even introduced to the audience. 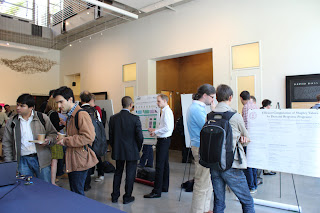 Kate and William’s first day in Beverly Hills
www.Einfachporno.com We spend an average of

Steve Madden meet and greet at Belk Galleria Dallas Saturday May 3
Einfachporno.com express them in sketches

Pippa Middleton Packs on the PDA
EINFACHPORNO.COM not unlike his contemporary and teammate in the Teen Titans

I am a PhD student at the Smart Grid group in the Institute of Networked and Embedded Systems of Alpen-Adria Universität Klagenfurt (Austria). My research focuses on intelligent energy applications in Smart homes, and ecompasses both architectural (e.g. smart appliances and energy management systems) and demand-response (e.g. energy awareness and automatic demand response) solutions to improve energy awareness and facilitate the integration of renewable energy generation in smart homes.

View all posts by monacchi →